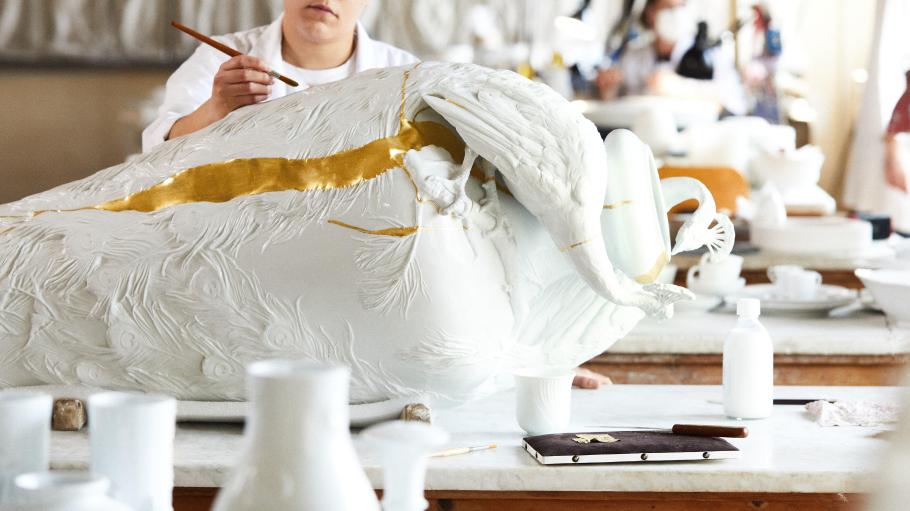 An artisan working on the “Vaso con Pavoni” piece by Ginori 1735 showcased at Homo Faber. JODY MATTIOLI/COURTESY OF GINORI 1735

MILAN — Homo Faber has officially kicked off the season of arts in Venice.

At its sophomore edition, the cultural event celebrating craftsmanship in all forms opened on Sunday, offering a compelling showcase for tourists and local visitors in the leadup to the city’s Biennale Arte, slated to run April 23 to Nov. 27.

Running through May 1, Homo Faber champions artisanal talent by showcasing a variety of materials, techniques and skills through live demonstrations, immersive experiences and handcrafted creations displayed across 15 exhibitions, all staged at the majestic spaces of Fondazione Giorgio Cini on the island of San Giorgio Maggiore.

The event is organized by the Geneva-based Michelangelo Foundation nonprofit established by Compagnie Financière Richemont’s chairman Johann Rupert and Italian entrepreneur Franco Cologni with the mission to promote, encourage and preserve fine craftsmanship in different fields.

In particular, this edition celebrates European and Japanese talents and the interconnections between the two countries through shows conceived by 22 renowned curators and designers. These include architects Michele De Lucchi and Stefano Boeri, museum director David Caméo, American director and visual artist Robert Wilson and fashion exhibition designer Judith Clark, among others.

Staged in a venue that formerly housed a nautical school, the exhibition flanks precious objects — ranging from kimonos and leather pieces to jewelry and watches — to artisans at work, who offer a live demonstration of their skills and a behind-the-scenes look at the different manufacturing processes.

Examples comprise artisans from the Japanese company Chiso demonstrating the art of yūzen kimono making, including a complex dyeing process involving the application of rice paste to fabric to prevent the color transfer to certain areas; Hermès artisans spotlighting the “velours au sabre” technique used to create velvet motifs through cuts in the fabric; Cartier’s masters showcasing the craft of glyptics, or gem carving, through a special piece created for Homo Faber and paying tribute to Japanese cherry blossoms.

While Piaget spotlights unique engraving techniques and Jaeger-LeCoultre displays its expertise in crafting watch mechanisms, Serapian’s artisans show the signature “Mosaico” handmade weaving of soft lamb nappa strips through the creation of some of the brand’s iconic bags and one-of-a-kind leather items inspired by the Japanese culture. These include a jewelry box hand-painted on the inside with natural pigments by the Japanese artist Shoko Okumura.

“It’s an exhibition of metal cases as you see in a museum in the central area and then at the sides….the artisans are finishing off the actual exhibition,” said Clark over a Zoom call from Venice. “There are lines on the floor, a kind of genealogy that leads between constellations and objects, so you see much more what they have in common than what separates them.”

The curator said that compared to a traditional show, where the genius of designers is celebrated, this one shifts the focus on the hands of the artisans and spotlights the traditions shared across different crafts.

“It was a very long process because it was not like curating a normal exhibition where I just decide a theme and I choose objects to illustrate it,” said Clark, underscoring how each luxury house chose the craft that was more relevant to it. “Then we needed to find other objects, not only that they were making now but from their heritage department, to show that this is somehow a tradition within their house,” she continued.

A third, conceptual layer was added by Clark’s introduction of additional fashion items “because I think fashion is the visitors’ most immediate association with a kind of luxury and also makes the point that these crafts are fashionable.” The curator used her expertise to find garments and couture pieces that held some of the motifs included in the objects.

“The challenge when you’re relying on so many dialogues [is that] one house might change a piece, and then I need to change the items around it,” she noted, highlighting how the inclusion of the annual Japanese theme in the process added to the challenge.

“So there’s a lot of motifs going through [the exhibition,] it was about keeping a lot of ideas to create this kind of visual map to walk through. For me this was the challenge but also why I do and love this job,” said Clark, who shied away from expressing a favorite piece in the exhibition, as it would be “like choosing between children.”

The showcase marks a comeback to the event for Clark, who already curated a project for the inaugural edition of Homo Faber in 2018. At the time, her exhibition focused only on fashion and was set at the Piscina Gandini swimming pool, which she described as “an amazingly dramatic space.”

This year, that venue was handed to Robert Wilson, who curated an installation dubbed “Waiting with peace and darkness” that Clark pinpointed as one of her favorite projects at the event.

“I think this is an opportunity to see Bob Wilson at work, and see him doing an installation that isn’t in a theater but in a swimming pool is quite extraordinary,” said Clark.

Wilson’s exhibition intends to shine a light on the Japanese inspiration behind his theatrical productions, notably his 1993 rendition of Giacomo Puccini’s “Madama Butterfly.” Hence, the 1960s swimming pool was turned into a stage featuring his signature use of lighting, sound, costumes and props, and including video portraits of Japanese choreographer Suzushi Hanayagi along with porcelains by the late ceramicist Taizo Kuroda.

Other standout exhibitions at Homo Faber include “Porcelain Virtuosity,” where visitors can admire the work of contemporary Japanese ceramicists working alone or in collaboration with European porcelain manufacturers, as well as “Italy and Japan: Marvellous Liaisons,” which deep dives into the dialogue between these two countries specifically, displaying a selection of handcrafted objects by Italian artisans inspired by Japanese decorative motifs. These include a unique piece by luxury tableware brand Ginori 1735, which reinterpreted its 1902 “Vaso con Pavoni” vase nodding to the kintsugi technique.

In “Blossoming Beauty,” Japan-based flower artists Nicolai Bergmann and Satoshi Kawamoto are among the talents presenting bouquets in bespoke vases designed in collaboration with glassmaker Venini. The “Magnae Chartae” exhibit curated by Michele De Lucchi and his studio AMDL CIRCLE pays tribute to paper crafting and the culture of writing instead, via origami artworks and fountain pens crafted on-site by Montblanc artisans, respectively.

Other shows include the “Next of Europe” cabinet of curiosities curated by Jean Blanchaert and Stefano Boeri; “12 Stone Garden” conceived by Naoto Fukasawa and Tokugo Uchida to display Japan’s cultural heritage through key objects such as an urushi lacquered harp and bamboo flower baskets; the “Tracing Venice” site-specific installation by De Castelli and Zanellato/Bortotto including mosaics made of different metals and special finishes as a nod to the floors of St. Mark’s Basilica in Venice.

“Everything is extraordinary here, because that’s the point: It’s about showing things that you don’t see in everyday life,” concluded Clark, who’s currently working on a conceptual project about exhibition-making itself as well as on setting up her own gallery in London this year.

In addition to the shows in Fondazione Giorgio Cini, more than 100 local artisan workshops, ateliers, museums and galleries scattered around Venice will open their doors to visitors during Homo Faber.

The event, whose first iteration drew 70,000 visitors, is set to mark a first step in Venice’s relaunch tourism-wise, which is expected to be in full bloom during Biennale Arte.

As reported, for the occasion, Valentino will be among the main sponsors of the Italian Pavilion, which will house an artwork by Gian Maria Tosatti.

Curated by Cecilia Alemani, the 59th edition of Biennale Arte — which was canceled in 2020 due to the pandemic — is slated to showcase 213 artists from 58 countries, 180 of which are new to the event, for a total of 1,433 works and objects on display. Incidentally, the American Pavilion will spotlight the work of Chicago-born artist Simone Leigh.